What can you achieve with organic over paid advertising? 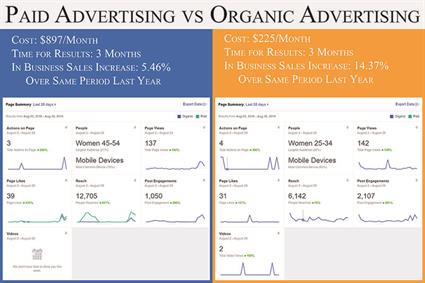 Initial thoughts are that paying to be seen and move up will garner you the best engagement and increase in sales. That is not always the case. We have several friends that pay for advertising to grow their business. They are reasonably happy talking with them. At random we listed out our social media maintenance plan contracts and asked them for a number between one and XX. They chose a number and we pulled up the results of that client. We will not be sharing the name of the clients but luckily for our comparison they are in the exact same field. They are located 15 miles away from each other in different towns. Both towns have less than 20,000 people in each town and average within a few hundred dollars the median income according to the last census data.

Both companies pay for someone to maintain their social media.

Through the organic process they too pay for maintenance of their social media only that items are written (content created/curated three times a week) specific to their business.

Winner: Tie (although organic is over $600 less both companies feel the money is well spent)

Actions on the page are the number of clicks on a page that either click on your page's contact information or call to action button. The paid advertising had three actions and the organic had four.

The target demographic for both businesses is men and women from 25 through 45 years of age. The paid advertising even though it was targeting 25-45 is actually hitting ages 45-54 the most. The organic is hitting the range of 25-34 the most.

Page views are the number of times people came to your social media page and viewed the content that was available. Paid advertising had a 137 views and organic had 142 views.

This is the number of new fans that have liked the page. For paid advertising they gained 39 new fans in the past month while organic only had 31% of new fans.

Reach is a very important factor in seeing who is interacting with your page. Reach includes items like likes, comments, and shares. Paid advertising had an amazing 12,705 people reached with organic they had 6,142.

Engagement is the number of people that have engaged with your posts through likes, comments, shares and more. This number is more of a driving force than reach as this is the number for those that are actually showing interest in your company's social media page and your products and services. Paid had 1,050 people engaged with organic there was an engagement of 2,107.

This is the number of times the videos on the page have been viewed for a minimum of 3 seconds (a short period for sure). Paid advertising doesn't include creating any and they have not at this time paid to have any created. With organic being part of their maintenance plan is the creation of a video each year they had two views in the past month.

Although we've already talked about how much in the beginning each company is spending let's talk bigger picture. With the social media being done by each company it took some digging to figure out the true "revenue" that was generated through social media. With some work this is what we found. For paid advertising they estimated they have increased 5.46% over the same period last year. With organic (and we double verified the numbers) they estimate they grew 14.37% over the same period last year. Both companies a year prior had social media. The paid advertising was paying for it last year to the same company while organic was doing it themselves and this year switched to having us help them with their social media account.

We had one tie, two for paid, and six wins for organic. Results will always vary from company to company. We give a big part of the lead (almost 2 percentage points) due to the savings in not doing paid advertising.

If you would like help with social media, search engine optimization, branding your company or more JM2 Webdesigners from Northwest Indiana would be honored to work with you in growing your company. We can be reached at 219-229-1633, email at sales@FawkesDM.com, or through our online contact form here.