Value of honesty in business 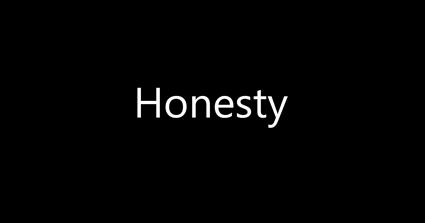 Honesty is often taken for granted until someone is caught in a lie. Trust is initially given when you don't know someone. This trust is given freely but can be quickly removed when you find that someone has been less than truthful. Some will have honesty as part of their core values but not their first core value. So why do we put it as the first value when others don't? This is a separator that allows us to be different, unique, and to stand out from the rest. Being from a small town of Chesterton Indiana I was brought up on a "Leave it to Beaver" type of lifestyle where a handshake is worth more than any document written by a lawyer to seal a deal. All services should be priced fairly and not rip someone off, and that communication should be polite, honest, fair, and yet firm when communicating.

Honesty has subtle implications that show the world who you are at your core. There is more than just honesty at the core of being honest. Honesty delves into your core integrity of who you are as a person and company. I have always heard that actions speak louder than words (said or written). In our daily lives, we see people say one thing and do something that completely contradicts what they say. We are human and a few imperfections are accepted due to being imperfect beings. That is no reason to give up on integrity or honesty.

I feel that when you put honesty as the foundational core of your business you are making a very bold statement to the world. I can tell you all day that security is our number one and honesty is number two (or later). If that is the case then if I tell you we are secure how much weight can you put into it? We could be lying to get the sale or we might not be secure but just don't want you to know. It is a very broad statement and something almost every business says. It is just where in their core foundation that defines where it truly fits their organization. I could say we take security very seriously but then is it or isn't it. Being that honesty is not at your core how much belief can I believe in anything you put above honesty?

When honesty is put first you are defining that everything after has to be truthful or it is something you will not be doing. Yes, you might misspeak on occasion but those should be a lot rarer than if being honest came later. Now with honesty as the primary focus and I state that we do everything we can to be secure you know that is most likely a truthful statement. When we shake hands and agree that we will help your business grow you know that it comes from our heart and we will do everything in our power to help you grow. Yes, there could be a contract that defines the work but you will rarely see us with a 10, 20, or 30-page lawyer written a document as we feel those are excuses to get out of a lie rather than perform.

You will see people that gain the success that has lied, cheated, or even stole. You will be confused like everyone else but have faith that truth will always prevail. Those people you see can never last the test of time. They start faltering after a while and jump from one business core to another business core until they can find something that sticks. Yes, a person that always tells the truth will fail. Often, they will – we have. Truth tellers will last because of their core of being honest, having integrity, and being fair with every business they work with. Someone that puts honesty first will look at their faults often and push to grow beyond any shortcomings and weaknesses to become better and more honest.

When you treat honesty as a core value you will treat employees, customers, and industry mentors all on the same level. You will be fair, honest, and show compassion to them. You will never talk about them behind their back (that's a form of being dishonest). You will be the person others seek to be. People will talk about you when you are not around, they will say bad things about you, yet they will secretly strive to be more like you. Honesty is contagious that everyone wants. It's free and something you will never run out of. In essence, you will be the seed that is helping make the world a better place to live. I cannot think of a better legacy to leave than to leave the world in a better place by being honest with unwavering integrity.

I feel that there should never be an exception to compromise your honesty and integrity. It defines you as a person (or company) and speaks volumes to those around you. By being honest you will be fair with others, treat others with respect, and will strive to help those even those that are not fair. Push yourself and strive to be the person that when you look back you can say "I was and am that person".