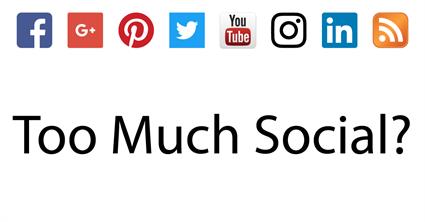 Recently I was talking to a prospective client. Perspective as after we talked we opted to not take the project on. The reason was many with the biggest as all they wanted us to do is babysit what they had, grow it, but not do anything with it. The first was the company didn’t want to create a marketing plan as they saw it as an added cost even though we do it as part of our core package. They had paid for the last one which garnered them the eight social media platforms below but couldn’t produce what they had created as they said they shredded it as it didn’t work. The second was they were not willing to drop the others and actually wanted to expand beyond those. Let’s look at what they have to start which is a copy of some of my notes from our meeting:

Beyond the above, they have an eCommerce page to buy off of but they have to call every person that orders as the pricing is wrong and they have to renegotiate the prices after someone orders online. They see that as a more cost-effective way than to update the prices.

When we finished talking with them I had helped them reset passwords and gain control of all their sites. They didn’t want to change anything they were doing and just wanted us to post once a week and that was it. I told them that would not create any results and would actually make them question what they were paying for. Sometimes money, even good, is bad money.

To turnaround your marketing it takes time and you need to work with those that want change. Trying to push the change to someone before they are ready is the worst thing to do. When I left they had control over all their accounts, left over a dozen action items, and let them know if they ever changed their mind we would love to help them out. I scheduled a follow-up lunch with their director of marketing as she wanted to change but the higher-ups didn’t. I know she has a tough uphill battle but have known her for years and know she will turn the ship around to where her seniors will be thankful.

In the end, I can only say get on the platforms that work best for your business. Be where your customers are, engage them, and participate in the conversation. Organically (e.g. not paying) is a slow battle but one that will provide you with dividends of rewards over the years. If you don’t know where your customers are the easiest way is to ask them.