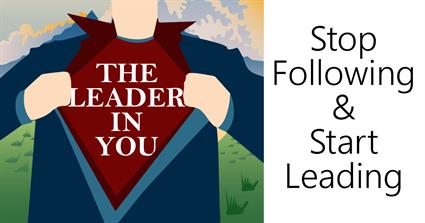 I was going to write an article about a client I met with last night but instead went through my list of old articles I had written back in 2014 and never published. Not that I couldn't write anything better today but this was just as good and rang so well when I read it that I think it speaks perfectly to the situation of many people following instead of being the leader they want to be. All too often we see small businesses following, focusing on the wrong items, and not working on their core strengths.

Two months ago, I sat down for a few hours with a new client who has a dozen (14 to be exact) competitors within 15 miles of his highly competitive business. His profit margin is an insane 60% over his cost. In this meeting we were going over his marketing plan (he had none – that is another story). As we talked he only focused on what two of these competitor businesses were doing. He was so focused on them the entire conversation revolved around each of them rather than his business and a plan for him to grow. In that meeting I told him we needed to focus, target for success, and we needed to focus on his small business to grow. He was shocked at my honesty as no one ever was this blunt and honest with him which I think was part of his problem with his past two marketing companies. The conversation went on for another half hour before we were able to get back on track to what we needed to be talking about – his business. Let's see why and what has happened in the past two months since that meeting.

The two competitors were so much on our clients mind he was losing focus of what his small business was about, what it stood for, and what he was trying to achieve. He focused on what they were doing and not what he wanted to do. He saw that these businesses that have been in his local community for more than eight years each owned position one and two of the search engines, they were getting more sales (he actually stalked their businesses and counted how many customers were going in/out of their business), and they were selling an inferior product compared to his (it really was inferior – and no we won't say what it is). I can understand his feeling but he was not focusing on what mattered.

We took his items and turned them into six phases of. The phases we broke down into areas that he felt were the most important for his message. These are in no particular order but are extremely important to him.

The first was looking at his website which was missing the mark. He didn't have a mobile experience, didn't answer people's questions, and wasn't kept updated. The content didn't help do a proper comparison of why his product solution was better. There was no call-to-action to drive people through the sales funnel process.

We dug into the search engines on two fronts. First the organic (free part) and the paid advertising part. When we started he wasn't on page 1 anywhere for any terms (he now owns position 1 for the majority and is in the top five for every other term he wants). For the paid advertising we looked at what had been done and we made modifications to the bidding process and cut his Google AdWords spend in half while increasing his overall sales.

Social media started producing a consistent message that brought out the personality of the brand with a focus of driving his audience to his website as his competitors were spending very heavily on social media and this helped bring them into his sales funnel and get people to start doing a true apples-to-apples comparison. We also invested in paid advertising and sharing in local groups related to his brand. The campaign was very strategic showing differences in his brand and others. This helped further get people asking the right questions (education is a great way of gaining customers). Part of the social push was a lot of videos to drive people in and asking all of his customers to take pictures (and video). They were asked to share these videos and tag his business. This was a great way to gain engagement and reach of his brand.

For his business being seen on the highway was important as people probably had not heard of his business before. We purchased and designed billboards as close to his top two competitors as possible which leaded to a further increase in sales.

With all of the above what we did was help take a client from being a follower and becoming the leader of his industry. His sales have increased, he is gaining local market share, he is becoming the true leader, and he is giving back to the community which was a core focus of what he wanted to do. He still focuses on his competitors but is no longer focused on them in the way he was. He stays knowledgeable of what they are doing but they no longer keep him up at night. He is looking for new opportunities and is growing as he is focused on being the leader rather than the follower. I have seen time and time again that by focusing on your strengths rather than what your competitors are doing that you will grow. This is what makes leaders and experts in an industry. When you stop leading what happens is you bash those around you, you jump on with everyone that will listen to make you feel good, and you stop doing what made you great to begin with.