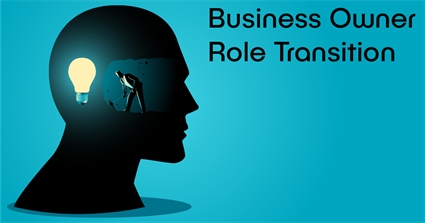 Our company is going through the biggest change of any growing business. I know there are many ways of phrasing it but I am calling it the “Business Owner Role Transition” and to me, it is the pivotal point for any small business owner that is growing. Many will feel caught in a trap right before or during this part. Many will sell their business when the end reward is just in front of them. They aren’t quitters but quit anyway as they don’t feel they can do it and they really can with that extra needed “push”. Many will not talk to others in the same spot and lock themselves into silos rather than reaching out and talking with those people – not friends, other businesses that you may consider competitors. I also see it as the hardest point in my 30 years of working.

In business, we make some serious decisions that define who we are, who we are not, and define our companies that we are building. I thought it was hard, adding our first employee was hard, and even our first (and last) price increase was hard. So why is this transition I believe harder than all of these when in the end my “workload” will be easier (yet harder – yeah that makes sense!).

A great place to start is looking at ten major milestones in the company’s history:

You will see from above I left off this Business Owner Role Transition as it is just starting (even though I said it started years earlier – I just didn’t realize it), and I feel it will take more than four months to just get started to reach the manageable place it needs to be for it truly to be considered a “transition”.

The next good place to start is what is this transition and how do I see it (today) evolving:

You can see from the above this isn’t a “lot” of stuff to do but takes as much preparation and planning as any other change in a company. This transition I keep calling the “fire the owner” and “replace the owner” roles so that the company is less reliant on the owner which I feel, and know from talking with other business owners, is the right thing to do. Many business owners won’t see that and why we will lose them. Those that do will appreciate it more as they know that this not only will help us serve them better but also they will get even more value from us as rather than relying on a single person you will have an entire team that will help their business grow and allow them to transition into the Business Owner Role Transition that we are going through ourselves.

In fact, I can see talking with many of those business owners and those that might see us as competitors to help them grow. There is enough work on this planet for countless businesses and the only one’s any of us should see as true competitors are the multi-billion dollar companies that raise their prices to make their stock/share holders happy. I am not saying there is nothing wrong with big business just that we solely focus on small business and as such you should always set your sites big while going at a manageable pace that doesn’t break or shutdown your company.

I would love to hear from you on this as I know to me this is a “big deal” and one I am looking forward to while also being scared of. Transitions, new chapters, and the unknown is always a scary place. This though is what I feel makes you stronger, better, and able to truly change the world in a good and positive way.